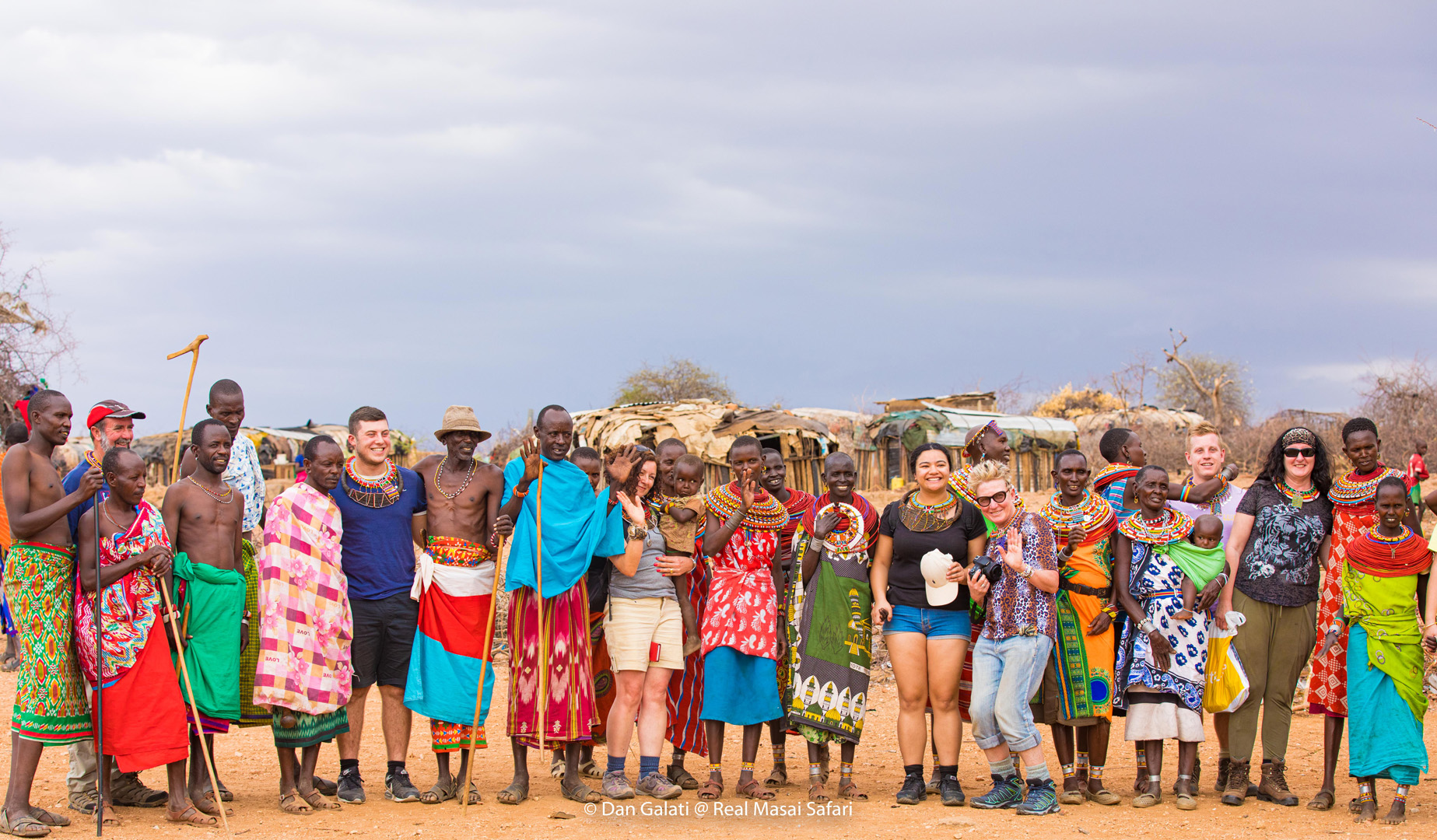 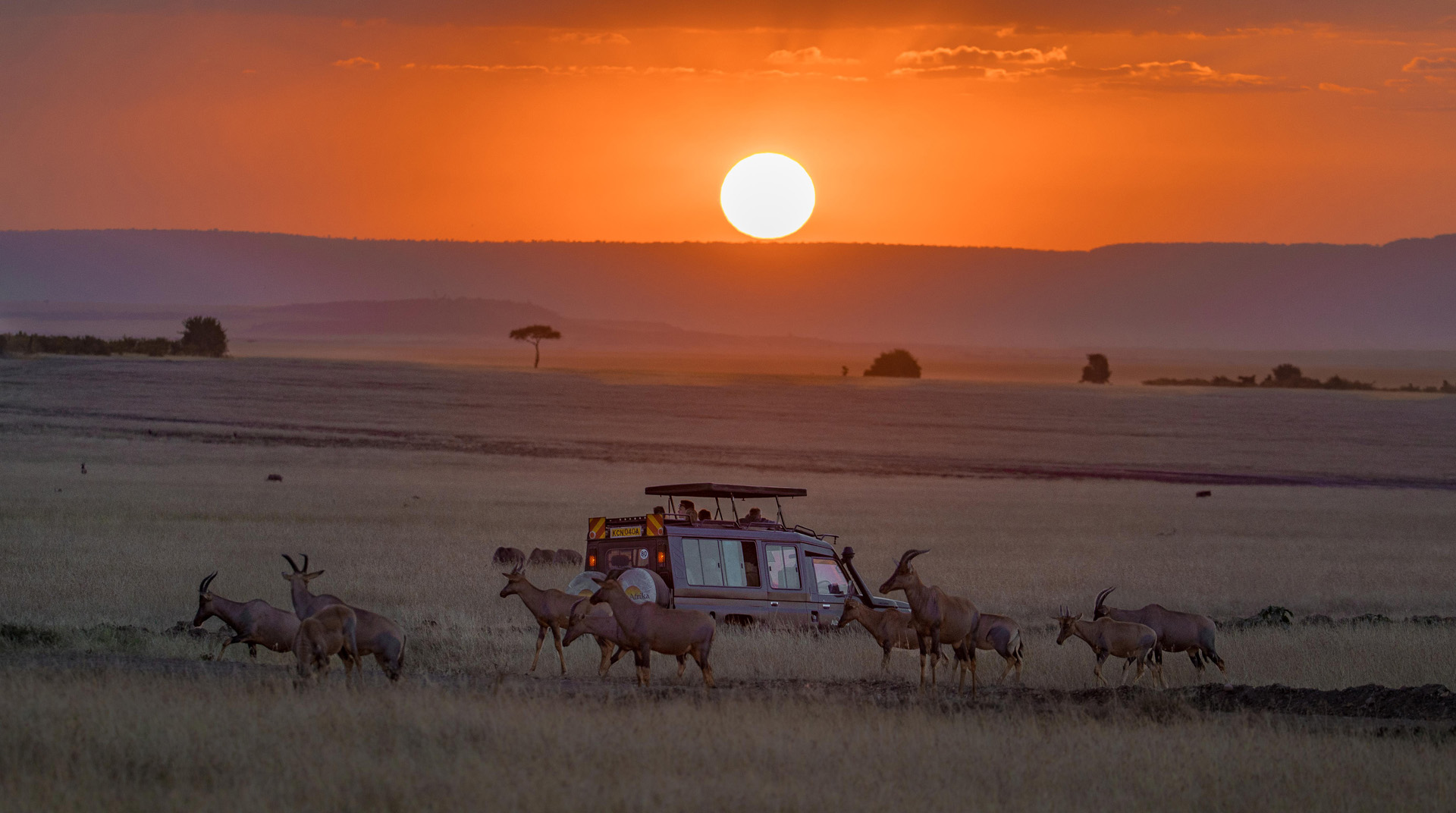 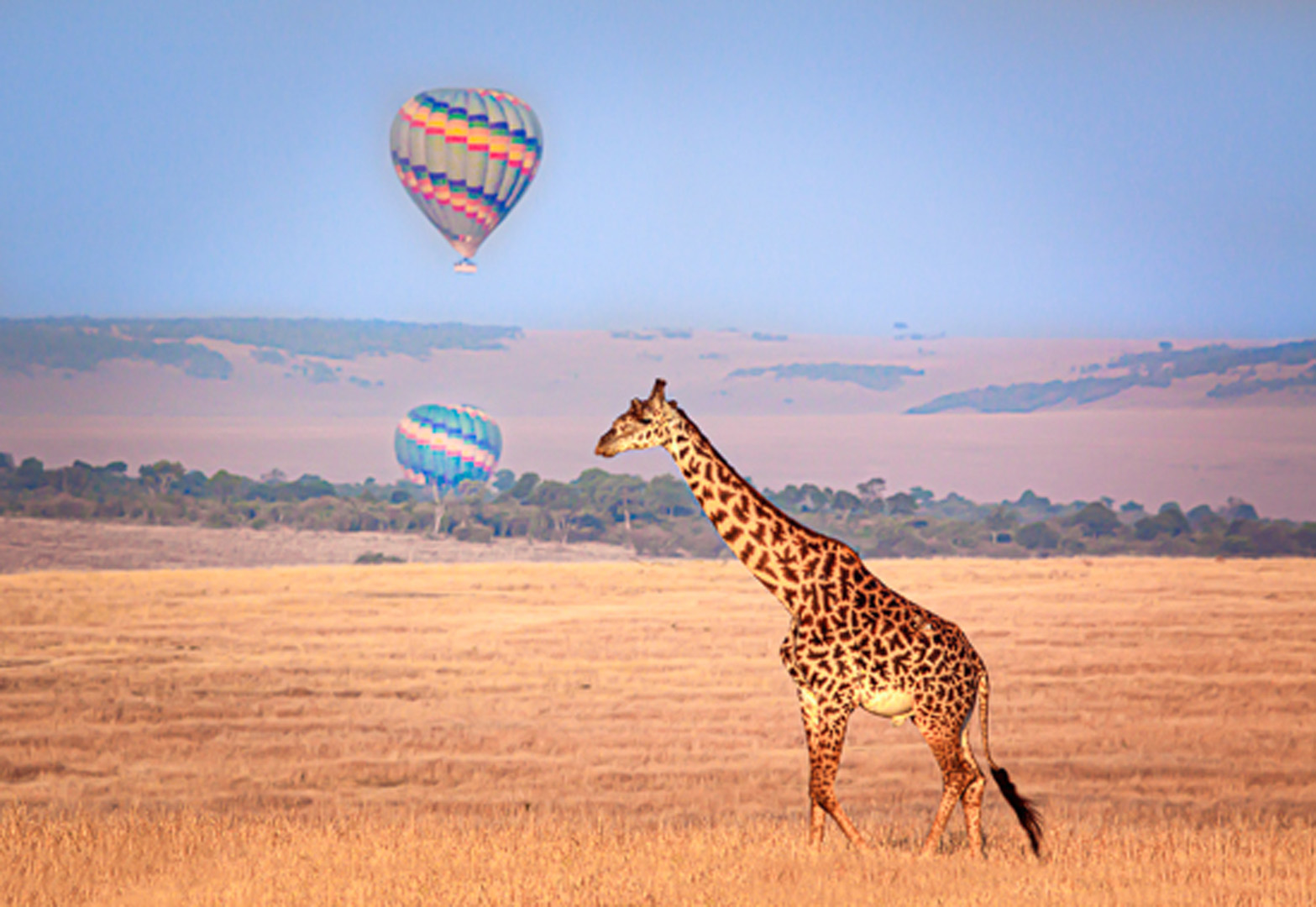 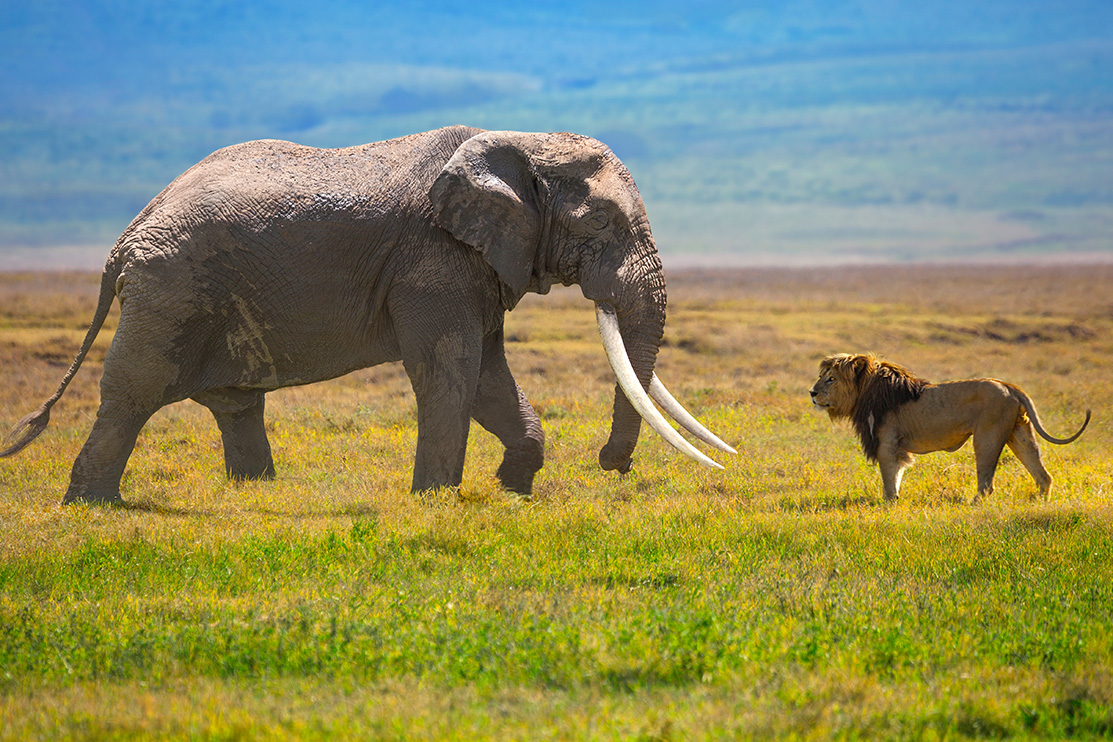 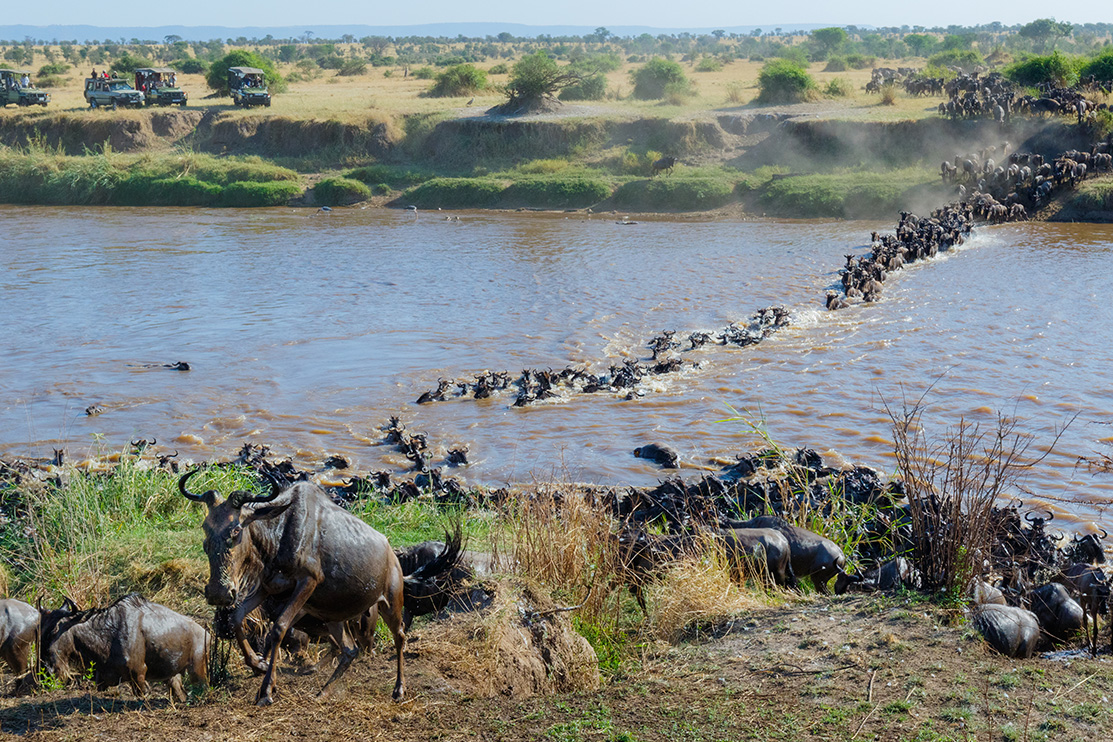 Stand in front of the world's Tallest freestanding Mountain (Mt Kilimanjaro) at the spectacular Amboseli national park. On a clear day, it can be seen from everywhere including your luxurious tent at Kibo Safari Camp. Amboseli boasts the biggest Elephant population in all of Kenya.

Fly from Amboseli to the very wild Samburu game Reserve. The Samburu is simpy stunning. Raw, wild with incredible landscape. Here you will see animals that cannot be found in many other parts of Africa, including the Grevvy Zebra, the Beisa Oryx, striped Hyena and Gerenuk to name a few. Samburu is also one of the best parks to spot Leopards.

The final 3 days of the tour includes a flight from Samburu to one of Africa's premier game parks the Maasai Mara. Home of the world famous Wildebeest migration, we drive to the treacherous Mara river crossing. It is here we can witness millions of wildebeest cross over from Tanzania's Serengeti into Kenya and attempt to avoid hundreds of hungry crocodiles. The Mara is home to Africa's big cat predators, including Lions, Leopards, Cheetah's and also the popular Hyena's. Sleep in luxury tents perched on a high hill overlooking the Mara plains and experience the Maasai warrior culture with a private village tour.

You will be picked up by our driver guide early in the morning from your Nairobi hotel. We then depart for a scenic road trip to the spectacular Amboseli National Park, en route to the luxurious 5-star Kibo Safari camp. After check-in, we relax and enjoy the surroundings before departing for an afternoon game drive. We witness a true African sunset and return to camp for dinner and overnight Dinner and Overnight at Kibo Safari Camp.

Full-day game drive in Amboseli as Mount Kilimanjaro stands in the background, the scenery offers postcard Photographic opportunities. Amboseli is home to the big cats, hippo, buffalo and an abundant range of wildlife including some of the biggest Tusk Elephants on the planet. We return to the camp in the late afternoon where you are free to relax in the swimming pool or indulge in a full body massage at the beauty spa. Dinner and overnight is at Kibo Safari Camp.

After early morning breakfast, we depart Kibo and embark on a game drive en route to Amboseli airstrip. We board a flight for Wilson airport arriving in good time for a connecting flight to Samburu airstrip. Upon arrival into Samburu, we commence a game drive en route to Ashnil Samburu for check-in and lunch. After lunch, we depart for our first game drive in Samburu. The Samburu reserve is possibly one of the most scenic and wildest safari parks in Africa. Situated alongside the Ewaso Nyiro River, there is plenty here to attract animals from the surrounding savanna plains. The reserve is home to an abundance of rare northern species such as the Grevy’s zebra, Somali ostrich, reticulated giraffe, gerenuk and the beisa oryx (also referred to as the “Samburu Special Five") as well as all the main predators. We return back to camp for dinner and overnight.

Early morning breakfast and checkout, accompanied by a short game drive in Samburu. We will then be transferred to Kalama airstrip for our flight to Wilson arriving in good time for a connecting flight to the world-famous Maasai Mara, arriving at our wonderful Lodge in time for lunch. After a well-deserved rest, we will head into the Maasai Mara for a late afternoon and sunset game drive. As the light changes in the afternoon, the predators come to life as we enjoy the famous Mara sunset. Overnight is at Oldarpoi Wageni Camp on Full Board Basis

After breakfast, we head to the Masai Mara for another full day game drive. We drive to one of the three Mara rivers hoping to see the wildebeest crossing which mostly occurs between July and late September. We will also stop to view and take photos of the Big Five we encounter. Masai Mara is rich in wildlife, including Hyena, elephants, giraffe, leopard, zebra and much, much more. We get to enjoy picnic lunch then continue with our epic game drive, viewing wildlife and enjoying nature all day long. Overnight is at Oldarpoi Wageni Mara Camp on Full Board Basis

Sleep in today and wake up for breakfast. Mid morning we depart for a walk to a Maasai village. Experience how the Maasai live amongst the wild animals and have survived for so long without electricity and running water. Enter their homes and see how they live!! We head back for lunch and relaxing afternoon at the camp. Guests have the option to go on an afternoon game drive or relax by the pool with cocktails!! or fancy a bush walk with the Warriors to a view point overlooking the Serengeti plains in Tanzania? The decision is yours!! Dinner and overnight at Wageni camp.

Final morning Breakfast, before we say our goodbyes to our newly found friends. We take a final scenic drive through the Maasai Towns enjoy a brief stop over at the Rift Valley view point for some souvenir shopping and photos of the valley. Next stop will be Nairobi to your hotel or the international airport for your connecting flight

Domestic flights are included in the tour

A transfer from and back to the airport is included